Don't you love it when you find the perfect fabric for the perfect project, that your machine works perfectly well, that you don't even have to make another spool of thread along and that you finally discover the perfect bias tape in your stash to finish the hem of said project? Well, I sure do^^ and this is exactly what happened with today's top: first, I adore the fabric, it's some airy crepe that I found in my beloved treasure shop -actually I should call it "Hoarder's" because it's a tiny fabric shop that's been open for almost 60 years and they still have stock from the past decades crammed in piles going up to the roof, complete with vintage dust and spider webs, seriously. The cute, colourful print immediately caught my eye and I knew it would make for a great late 70's style camisole so I paired it with my usual self-drafted baby doll pattern and less than an hour later I got this: 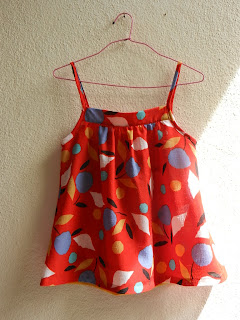 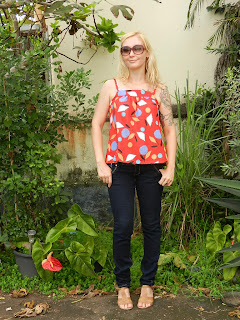 My derpy face says it all, I'm in love with my top! Also I tried it tucked into The Skirt and it looked great too :) I hope the fabric is strong because it's probably going to get a lot of wear!
Publié par Cecili à 02:10 9 commentaires:

After years of DREADING to sew with knits -fabric will move like crazy when tracing, chalk lines won't show, I need a serger, etc- I took the resolution to at least try it in 2013 and now I feel silly because it's actually super easy! I made two pairs of leggings and two tops and then I even made a dress!
So, the fabric didn't move around as much as I thought and about the tracing problem, I sew so often with Japanese and Burda patterns that I'm used to adding seam allowances while tracing^^ so here I simply added the seam allowances to my pattern and then cut around the paper, duh. I still don't have a serger -I almost got one in 2010 but had to give it back before I could use it because I was broke as hell and needed the money :(- but my brave little Singer does the job perfectly well with its zigzag stitch!
The pattern for the tops comes from an old Burda, I needed a design similar to my old beloved black top and this one is perfect with a boatneck and slim 3/4 sleeves: 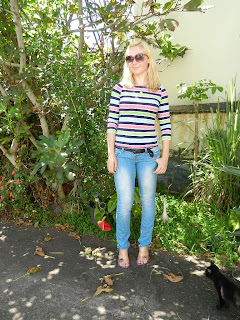 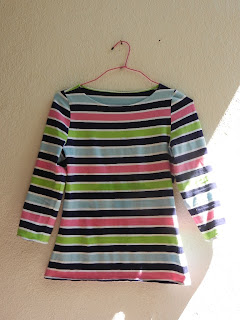 Of course I chose stripes, I managed to match them on the sides but not with the sleeves unfortunately. To finish the top I simply zigzagged the edges, folded them and stitched. I also have a leopard one which I made first, you can tell because I used stretch bias to finish the neckline, which was a bad idea since it ended a bit wonky -still love the top though: 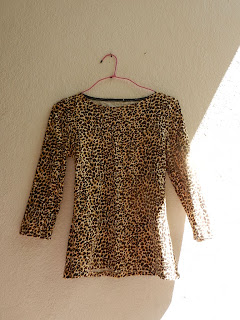 These two have become staples in my wardrobe, even when I don't feel like dressing I'm happy that I can slip into something handmade to wear with my jeans!
And since I have some of these fabrics left I want to make matching cardigans because I have a serious thing for twin sets :)
Publié par Cecili à 02:07 6 commentaires:

Stop me if you've heard this one before...

... I made a skirt! OMG this is turning into skirt week, right? I hadn't sewn any in months and now I want to make plenty of outfits from them. Yesterday I showed you the forgotten green 70's skirt and I liked it so much I immediately took to making another one, this time out of blended denim. 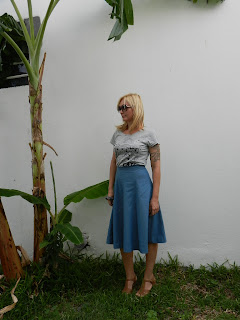 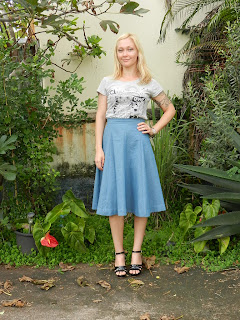 I didn't remember that the pattern for this skirt actually consisted in three pieces, a waistband as well as a centre and a side that you have to cut 4 times hence the eight gores. As you may imagine construction was pretty straightforward, the only change I added was to put the (handpicked) zipper at the back rather than on the side and the most time-consuming part was to finish the inside of the waistband and do the hem by hand, so it took me one big evening to make the skirt. 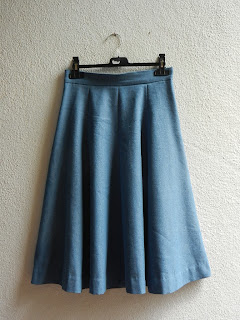 I even have 70's-like platform shoes to wear with the skirt: 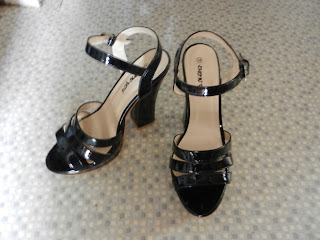 And I should get a lot of credit for making it through the handsewing because here is the kind of attack that I had to deal with every 5 minutes or so: 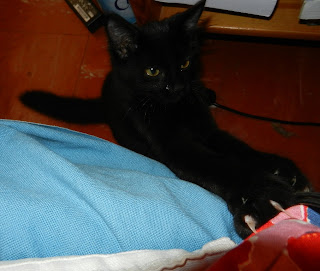 Something old, something new

And for once nothing (navy) blue! I felt super good in today's me-made outfit: 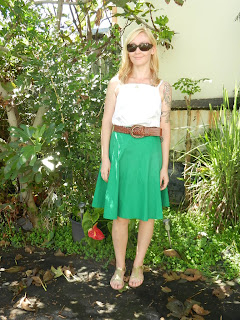 Such a nice little surprise, while sorting my clothes I stumbled upon this: 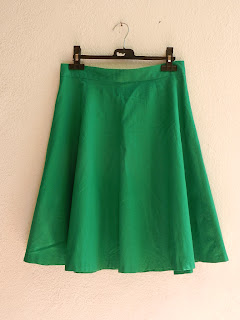 It's an eight-gored green poplin skirt made from a 70's pattern that I had forgotten about because it was a bit too big back when I made it and now, ahem^^ it fits -not sure if I should be glad or desperate! I wore it with a simple gathered top made with mystery synthetic fabric, and the pattern is a smaller version of my baby-doll tunic.
Finally I wanted to say that I've been extorted by my mum ONCE AGAIN, after she saw my blue and white R dress she asked for one so I had to make this for her: 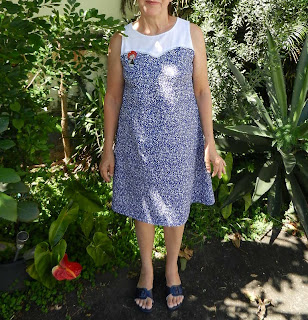 Lol I'm such a giving seamstress, I should totally get rewarded with tons of fabric and patterns for my upcoming birthday^^