I had a little fabric left from my latest Lolita dress so I used it with a basic Burdastyle skirt pattern that I slightly altered and got that cute little number: 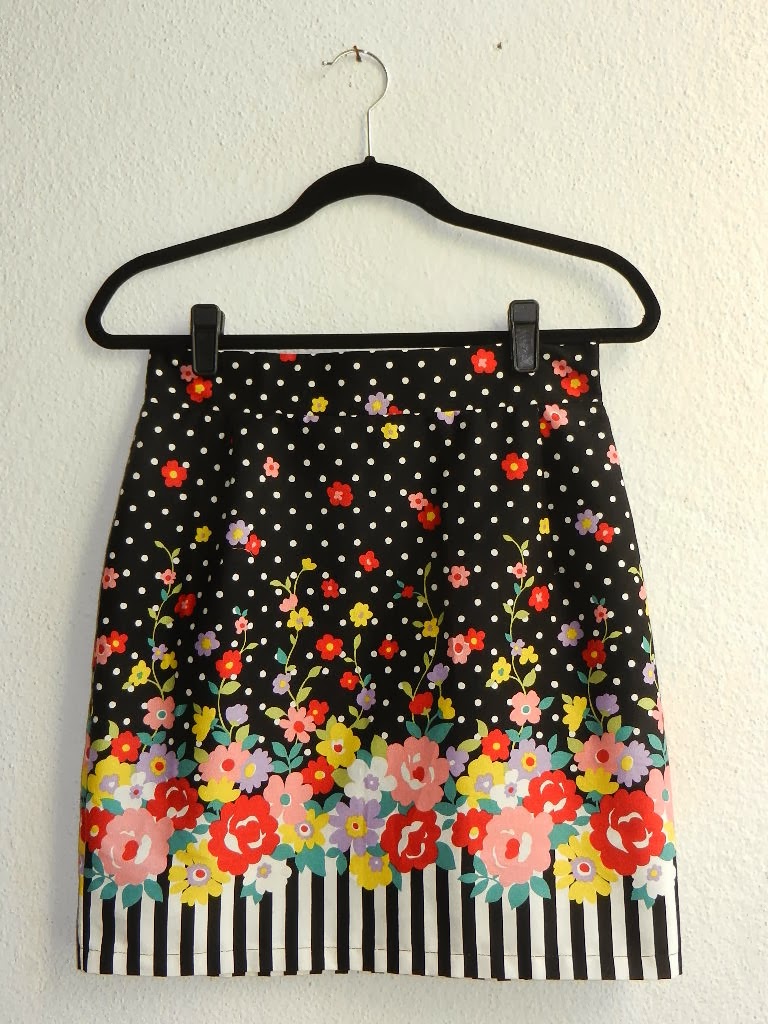 About the changes, I only shortened the pattern length and added a 5cm wide waistband because I like it better this way. 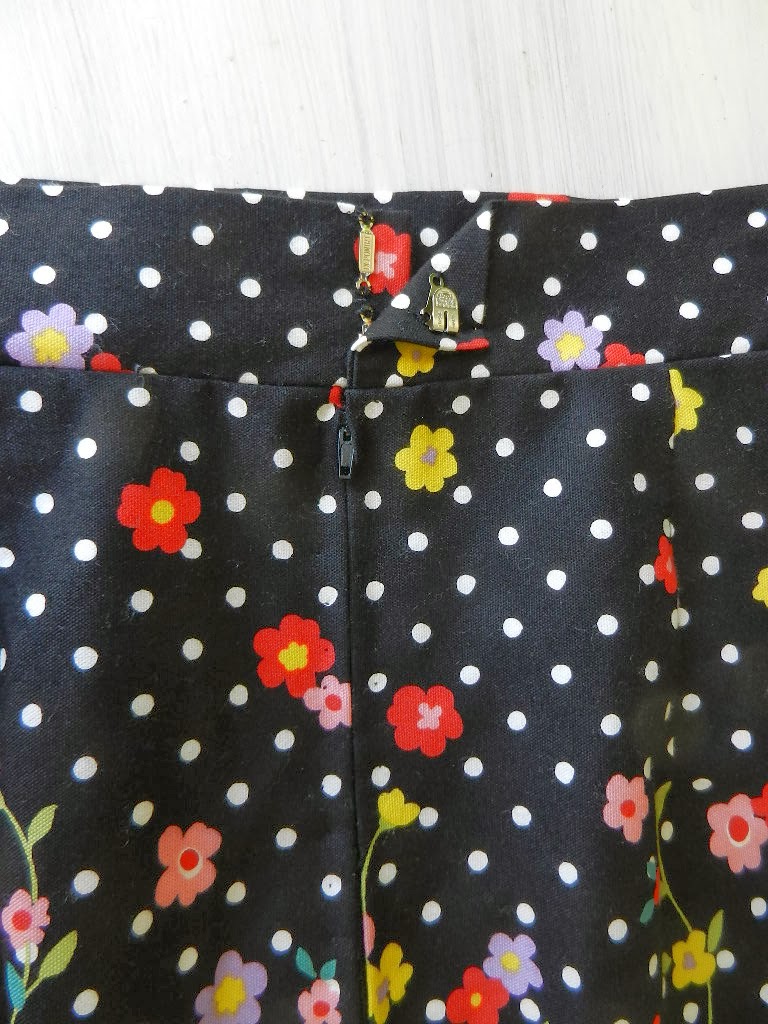 Regular hand-picked zipper and fasteners at the back 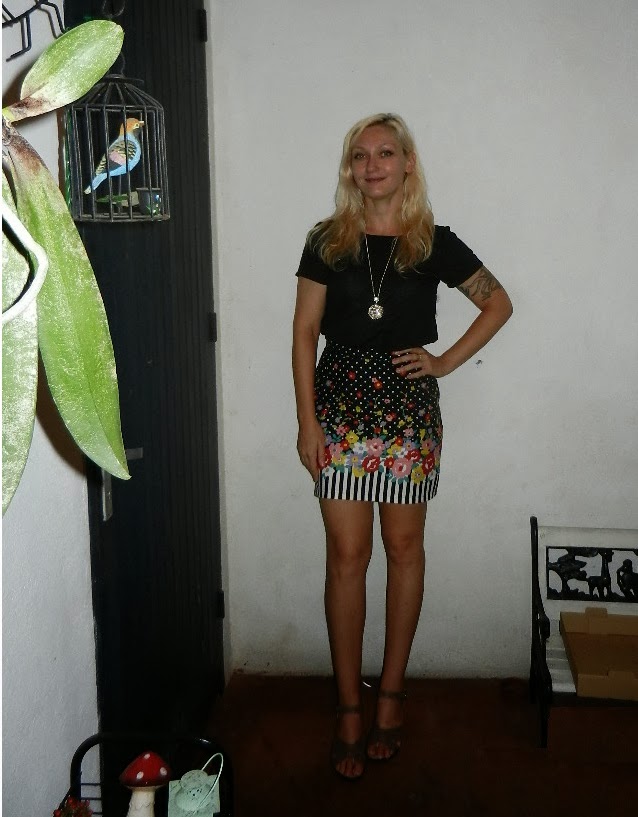 Here it is worn with a black rayon blouse I sewed using the G pattern from the Sweet Dress Book, I LOVE this design and have already made several tops and even a dress from it. Also given the ongoing summer temperatures rayon is a pleasure to wear, it's the only thing I can bear with cotton!
Publié par Cecili à 05:17 10 commentaires:

Living on a tiny rock in the middle of the sea means you can never be sure if and when your orders from outside may arrive so thank you technology for printable patterns! Today's garments were made using different era and style pdf patterns but I'm equally happy with both :) 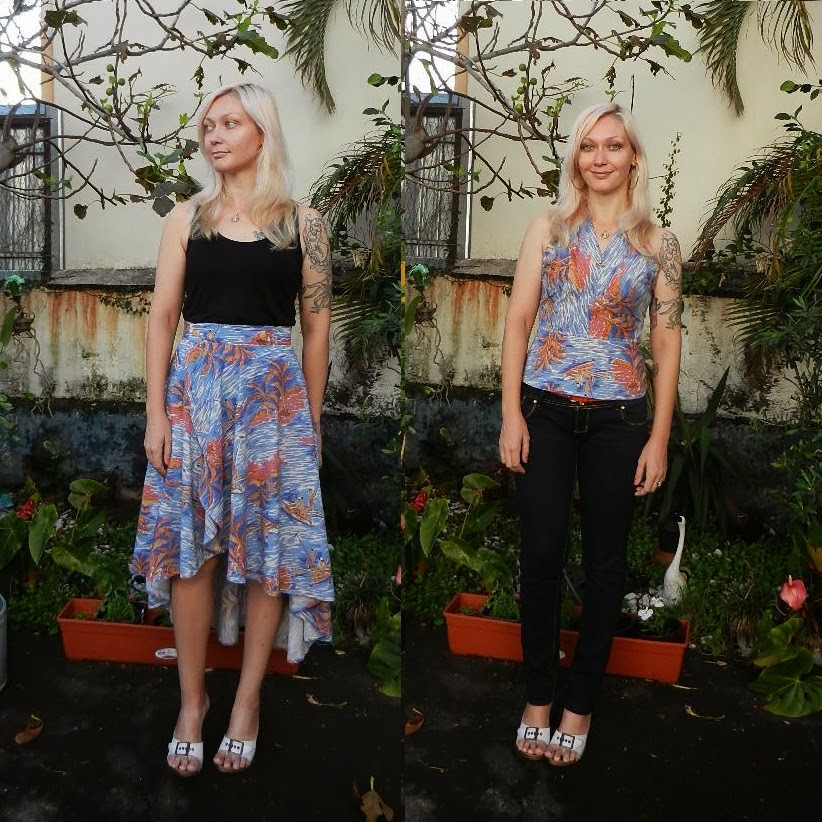 Also can you guess which photo was taken the day after my Kirin and sake fueled night?

Let's start with Megan Nielsen's Cascade skirt which had been in my mind for a loooong time -as well as the Tania culottes but this is for another post. I love everything about this skirt, the awesome train-like back, the flouncy, glamourous front panels and of course the fact that it's super easy to sew: tracing, cutting and sewing took less than one hour and as for hemming I folded the fabric to the inside and used a zigzag seam all along because I'm lazy like that. Naturally I had to fiddle with the waistband and make my own which didn't change much in the end except that I made the second buttonhole on the wrong side and had to cheat with a sewn-on button to keep the symmetry. 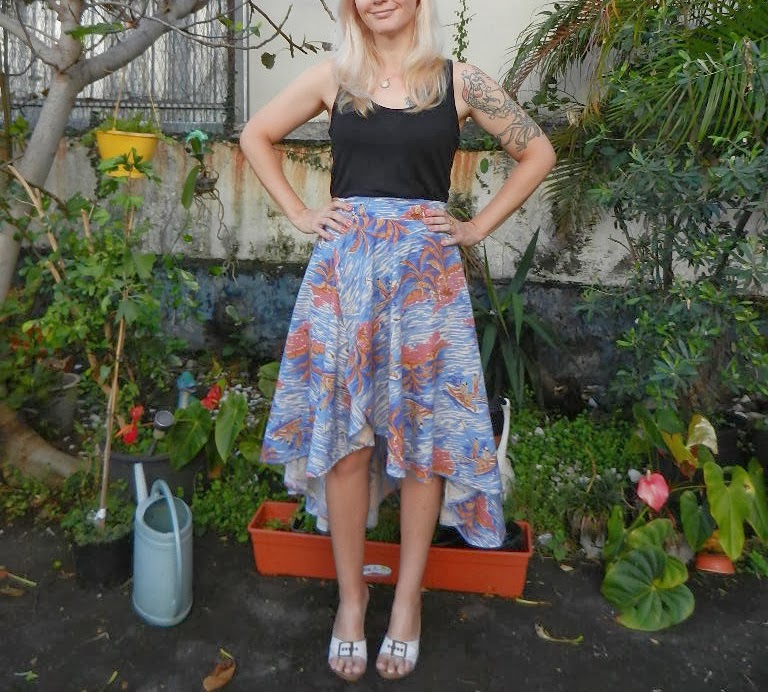 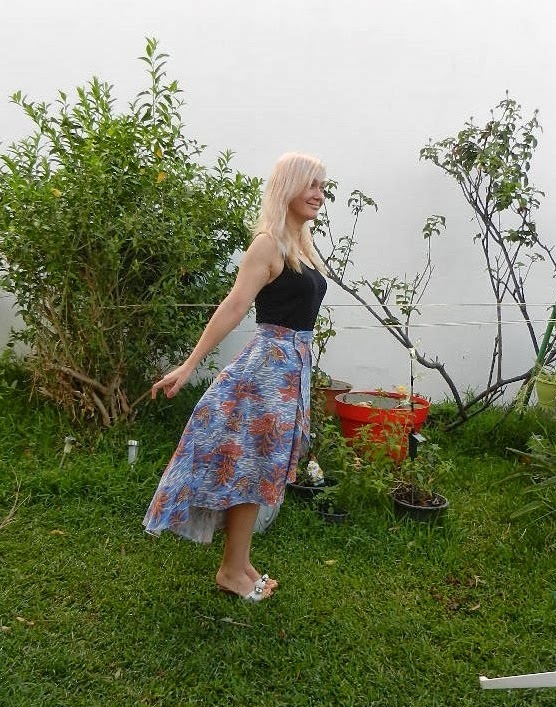 Now I chose to make the skirt with some amazing vintage cotton fabric I found in my usual local treasure shop, the colours and print are beyond gorgeous and it gives a very 70's vibe to the skirt IMO, however given the layout of the pieces I ended with vertical waves and people in boats in the back, I can't decide if it looks horribly bizarre or if it's okay. 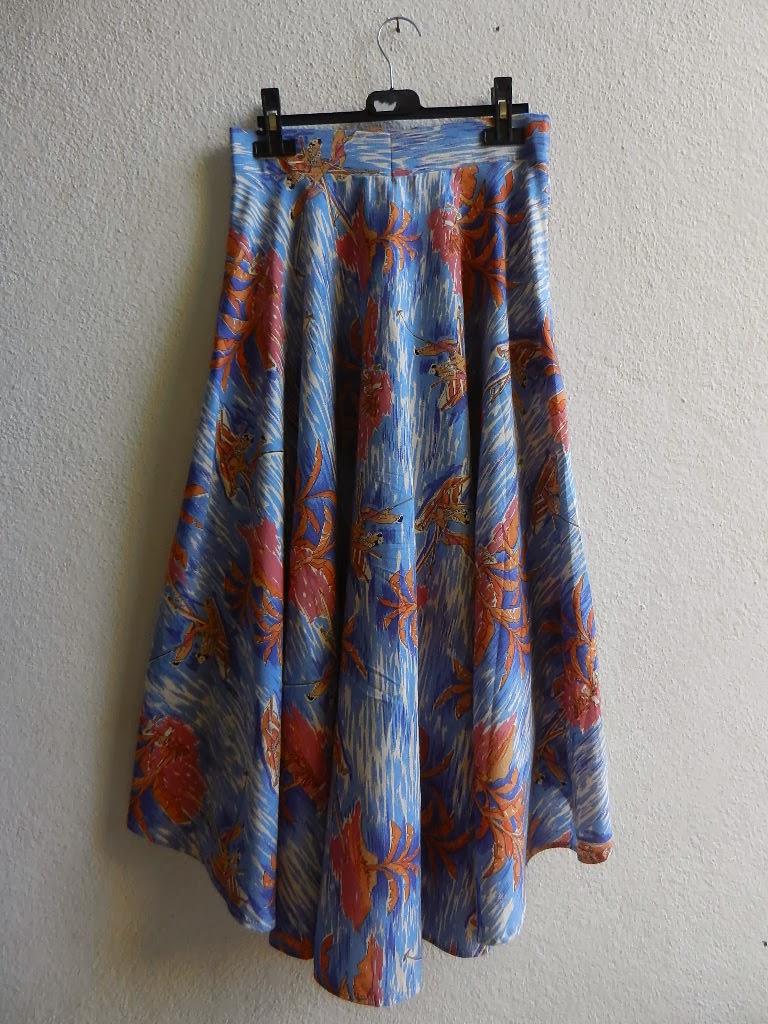 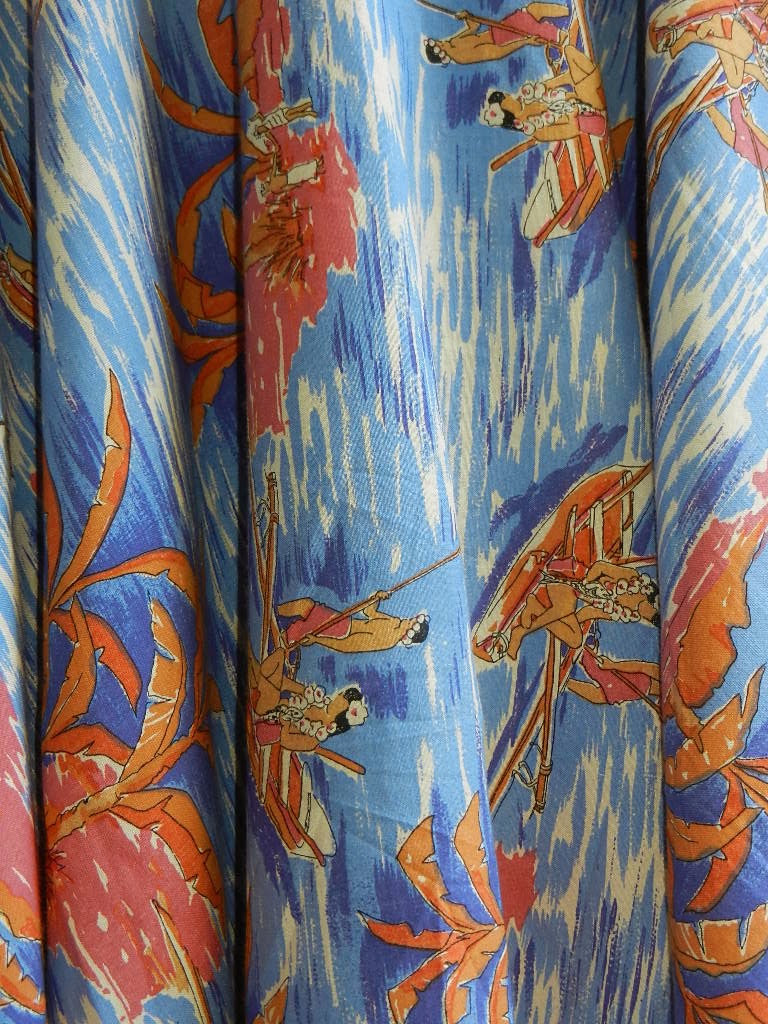 As for the top it's a halterneck pattern from the fifties which I purchased here, since my test garment was a bit large I altered it but it ended a bit tight, especially in the decolleté area. Well I'm fine with modest necklines so I'll wear it anyway! 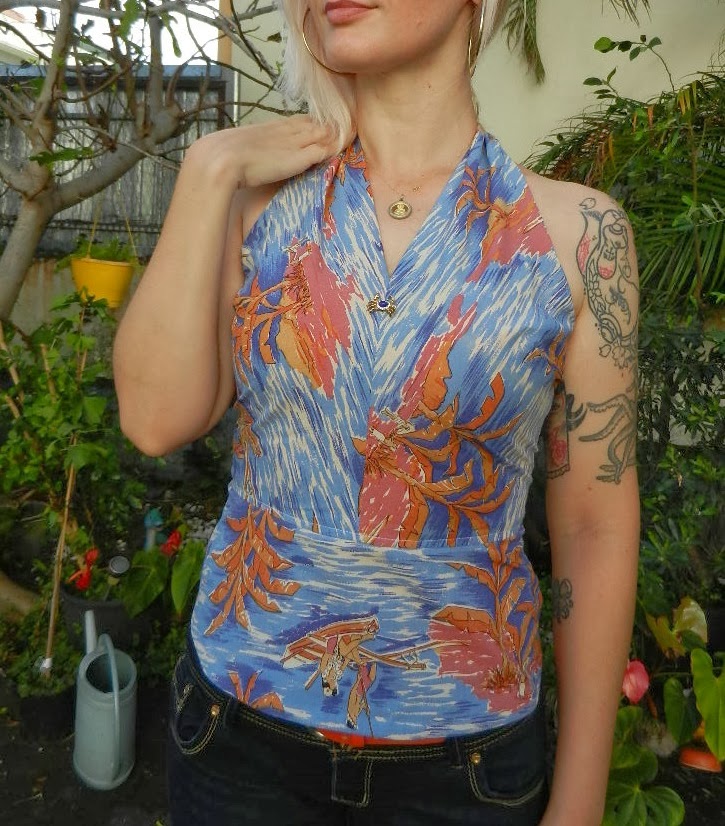 The bodice is cut on the bias, there's a peplum in the front and the back is made in one piece with darts. I moved the zipper from the side to the back because I think it looks neater there. And yes I have already paired the top with the skirt and they worked really well together but sadly I haz no pic :(
Publié par Cecili à 01:27 4 commentaires:

A lot of whining and a little sewing

OMG that end of year was atrocious and I'm not even exaggerating: of all the stupid things to do for someone who never sets foot in nature I went for a 5-hour hike in the forest last week so of course I got days of horrible stifness and caught a nasty, nasty cold after that. Then on New Year's eve and on 01st I only wanted to stay at home and watch Attack on titan but some assholian neighbours of ours had to put their stupid stereo on maximum sound for 24 hours straight and make the whole house shake. Last but not least today we're going through a cyclone. How was your end of year^^
Since I didn't feel like going out this year I don't have any party garment to show you, however I did manage to make something for my last days at work, it's a repeat of the outfit from the previous post: 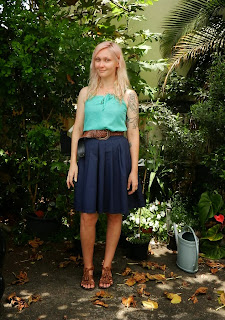 The skirt is Burda 133 in heavy navy cotton, I didn't add the pockets because my mind was a foggy mess from the forest-induced cold and I just couldn't figure out how to sew them^^: 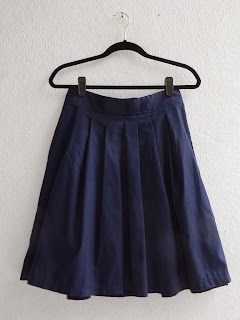 The top is design 05 from this Japanese book in aqua cotton veil: 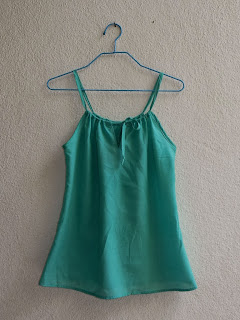 Okay I've finished ranting, let me wish you all a very happy new year and see you along 2014 :)
Publié par Cecili à 01:09 5 commentaires: